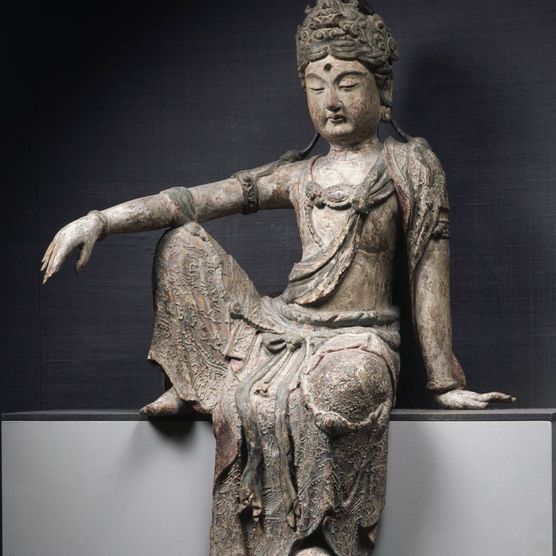 The Arts Council of Princeton partners with the Princeton University Art Museum to provide free virtual art-making classes. Weekly classes are taught by ACP artist-instructor Barbara DiLorenzo over Zoom. With an emphasis on drawing with pen or pencil on paper, each week’s lesson in this series will be inspired by a sculpture in the Museum’s collections.

This live art-making class is inspired by the Chinese wooden sculpture Guanyin seated in Royal-ease pose, which was carved and painted around 1250, during the Southern Song dynasty. The Buddhist deity Guanyin is the Bodhisattva of Infinite Compassion: a figure who has achieved the highest aim in Buddhism, enlightenment, and may pass into nirvana or freedom from suffering. This statue’s flexible pose of rajalilasana, or royal ease, with a raised leg and casually draped arm, became associated with the deity in the late ninth century.

In this session, we will draw this sculpture of Guanyin with a focus on rendering the drapery and relief designs.

This event will include live closed captions in both English and Spanish. English captions are available directly in the Zoom toolbar by clicking the “CC” icon. To access Spanish-language captioning, open Streamtext, where you can select “Spanish” to see the live captioning.

Materials list for drawing classes can be found here.

LATE THURSDAYS! This event is part of the Museum’s Late Thursdays programming, made possible in part by Heather and Paul G. Haaga Jr., Class of 1970. Additional support for this program has been provided by the New Jersey State Council on the Arts, a partner agency of the National Endowment for the Arts, and the Curtis W. McGraw Foundation.