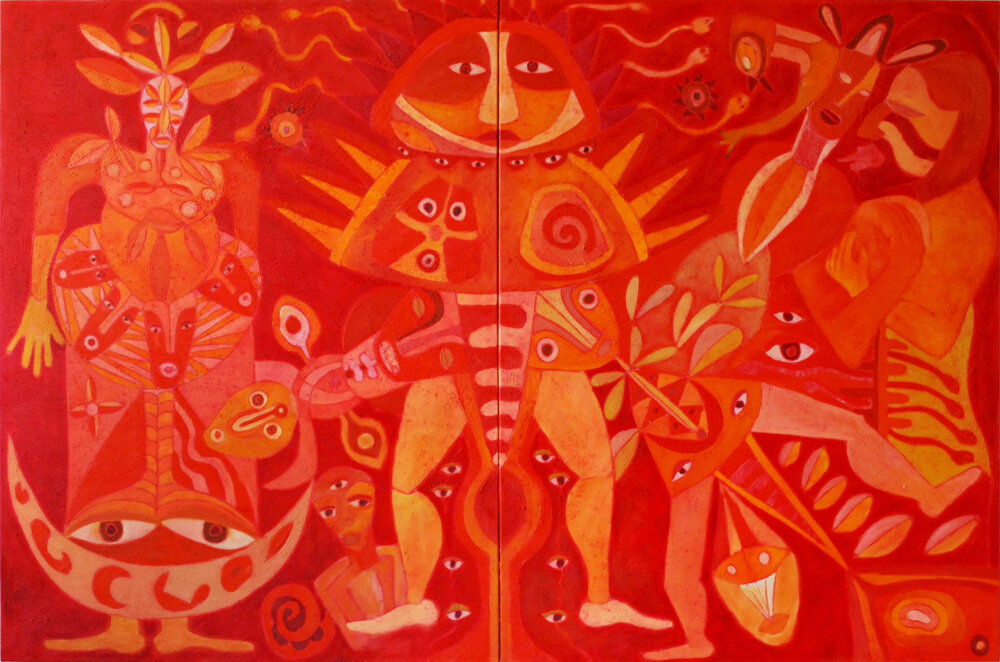 Opening Reception: Tuesday, October 18 | 5-7pm
Free and open to all

Introduction
In 1997, while living in Mexico City, Princeton resident Michelle Pirone Lambros met Karima Muyaes and her parents, the renowned Mexican mask collectors, Jaled Muyaes and Estella Ogazon. As Michelle’s passion for Mexican mask collecting grew, she was drawn to their daughter Karima’s art, whose influence of the deep and rich history of traditional dances and the aesthetic of masks was apparent in her work.
Karima’s visit to Princeton, and her exhibition at the Arts Council, marks a very special reunion of Michelle’s and Karima’s friendship and the admiration they share for Mexico’s incredibly rich, artistic heritage. The event will be all the more special as the exhibit coincides with Day of the Dead, giving the exhibit a special focus as it pays tribute to this important and uniquely Mexican tradition.
Background
Karima Muyaes was born in Mexico City, Mexico, in 1960. Her formal education began at the Universidad Nacional Autonoma de Mexico (UNAM), continued at the School of Fine Art at the Universidad de la Americas in Mexico City, and concluded at the School of Art in Toronto, Canada, where she specialized in printmaking at the storied “Open Studio”.
Since 1981, Muyaes has exhibited her work in more than 30 individual “one-woman” museum and gallery shows and more than 50 group shows in the United States, Canada, the United Kingdom, Germany, the Czech Republic, Chile, Colombia, Costa Rica, and Mexico.  Exhibitions in Mexico City and Oaxaca include numerous prestigious galleries and museums.
In addition, her work is included in the “Women beyond Borders” exhibition, which continues to travel worldwide. Her art has sold at a number of auction houses in the United States, including Swann Galleries (New York City), Classique-Erotique (Scottsdale), & Stanford Auctioneers (Phoenix). Muyaes has studied with a number of renowned international artists including Santos Balmori (Mexico, for painting & drawing), Juan Alcazar (one of Francisco Toledo´s best known disciples, for printmaking), and Curlee Holton (USA, for printmaking).

For more information and to preview her work, visit Muyaes’ website.