Steep Your Way: A Teapot Workshop with Samuel Johnson 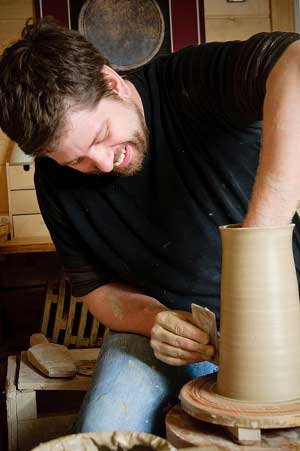 Learn to make a teapot while considering issues of functionality, design, and the independent life of a pot during this hands-on, interactive workshop. This workshop will be led by Samuel Johnson, Potter and Professor of Art and Department Chair at the College of Saint Benedict and Saint John’s University in Central Minnesota.

Samuel Johnson is a studio potter, painter, independent curator, Professor and Chair of the Art Department at St. John’s University and the College of Saint Benedict. After studying painting and ceramics at the University of Minnesota at Morris, he served a three-and half-year apprenticeship in pottery under Richard Bresnahan. In 2000, he was invited as a guest of Denmark’s Design School to study Scandinavian Ceramic design in Copenhagen, while also working at the International Ceramic Center in Skaelskor and as an assistant in private porcelain studios. After working for a short period in a studio in New York, he traveled to Japan as a studio guest of Koie Ryoji, later earning his MA and MFA from the University of Iowa. He has taught workshops at Universities and Art Centers throughout the US and Japan. His work is included in museum collections at the North Dakota Museum of Art, The Rourke Art Museum, and The Minnesota Historical Society. Samuel-Johnson.com @samueljohnsonpottery