The Neighborhood Portrait Quilt is part of a permanent exhibition that tells a story of important leaders and residents. 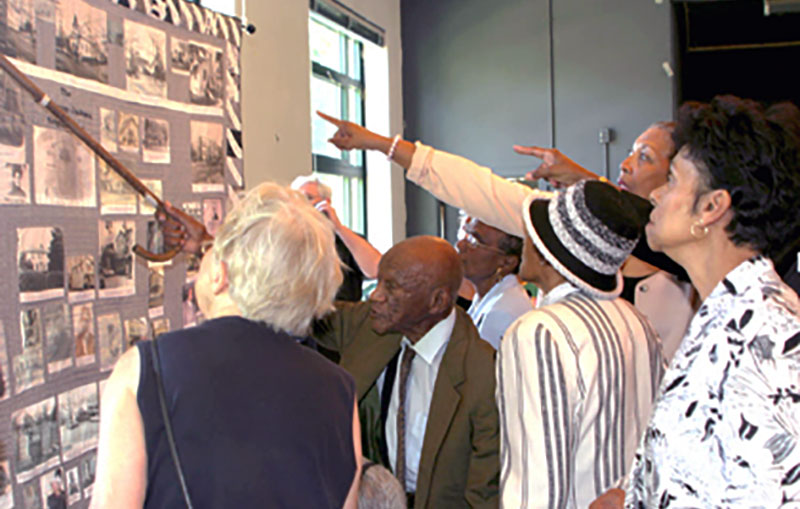 The Arts Council of Princeton’s Paul Robeson Center is fortunate to be located within the Witherspoon-Jackson neighborhood, an African-American community rich in historical significance vital to the fabric of the town. Neighborhood Portrait is a permanent exhibition that tells a story of important leaders and residents, like Paul Robeson, and key institutions that have made this neighborhood a vibrant part of Princeton’s cultural life. Utilizing materials drawn from the collection of Historical Society of Princeton, the exhibition includes documents and photographs that illustrate the history of the building site where the Paul Robeson Center is situated. These formal and informal snapshots help narrate the history of racial segregation and the eventual social integration of Princeton’s residents, and even more so, the cultural strivings of Princeton’s African-American residents to create and build a deep and full community.

On Sunday, September 11, 2005, at 1:00 pm, in the loft studio of the Paul Robeson Building, the Arts Council unveiled the centerpiece of the future building’s permanent exhibit of the Witherspoon-Jackson neighborhood—an original, hand-crafted quilt created through the transfer of over ninety photographs that together illustrate the history of the neighborhood. The photographs were contributed, solicited, and selected by four neighborhood residents, who also chose the quilt material and determined the order of the images. They also collected on small squares that form the perimeter of the quilt: the signatures of many of the current residents of the John-Witherspoon.

The quilt was crafted by local quilter and educator Gail Mitchell. At the celebration, Ms. Mitchell spoke about the project and about the significance and intricacies of quilt making. The neighborhood residents involved in the creation of the quilt—Shirley Satterfield, Minnie Craig, Lois Craig, and Cynthia (Chip) Fisher—were also on hand to share with the audience their knowledge of the neighborhood and the historical context of the quilt. During the afternoon, long-time residents of the neighborhood who had not yet signed the quilt did so proudly. “This event is the culmination of years of planning and of an ongoing collaboration,” said board member Janet Stern, who, as the Arts Council’s program director, first suggested the idea of a quilt to the neighborhood’s residents. “The project brought together people who might not otherwise have crossed paths, and that is just one of the reasons why we are so excited about it. It was also a pleasure to watch the neighborhood volunteers become more and more enthused as the photos evoked memories and discussions about people, places, and events from the past,” added Ms. Stern. “We were so privileged just to be there and to listen in on these personal reflections on the remarkable history of the neighborhood in which the Arts Council is situated. And then to see that history portrayed through the esteemed art form of quilt making is gratifying beyond imagination.”

The quilt will be accompanied by captions that identify each photo. Following its unveiling at the Arts Council, the quilt joined the Preserving our Past exhibition at the Trenton City Museum at the Ellarslie Mansion. The quilt returned to Princeton to exhibit at the Arts Council’s conTEMPORARY Arts Center throughout the month of February in celebration of Black History Month and was a component in the Black Arts Extravaganza on February 26. The quilt traveled “on tour” to the neighborhood churches and other institutions before it took up its permanent residence in the Arts Council’s expanded facility.

1 Witherspoon Street in the early 1920s

5 Morning Star Church of God in Christ on Birch Avenue, 1941

10 Diploma of a student at Witherspoon School, 1894

15 In 1948, the Princeton Plan integrated the public schools in Princeton Borough

21 Houses that were moved in order to build Palmer Square

23 The Elks Lodge on Birch Avenue

24 The Charcoal Inn on John Street, the social club for colored men

45 The “Colored YMCA.” The original building was replaced with the present building in 1938-39

49 Map of Witherspoon-Jackson neighborhood, Courtesy of Historical Society of Princeton

54 Entrance to the colored section of Princeton Cemetery

66 The Citizen, a weekly Negro newspaper

69 The site on Clay Street of the ice plant owned by Andrew Teague and George Barclay in the 1930s to 1950s. Also site of Gordon Park, on property owned by Addison Gordon.

79 The Princeton Nursery School on Leigh Avenue, started in 1929

86 Floyd Campbell, who served in the Army during World War II

89 The Phantoms Baseball League, circa 1950s