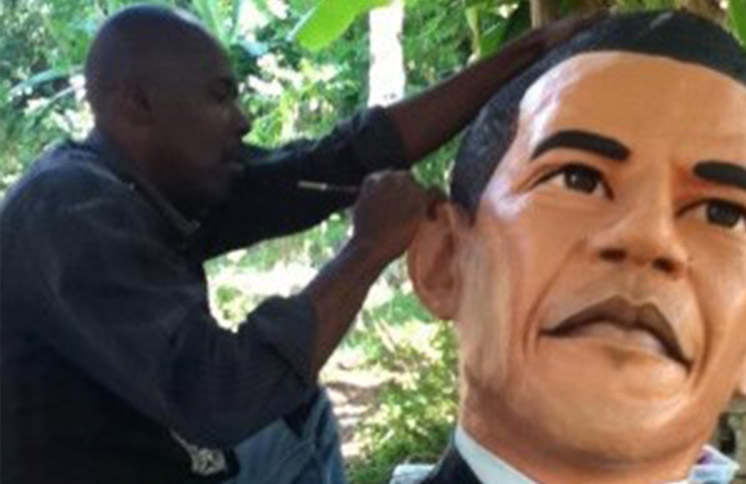 The Arts Council of Princeton and Lewis Center for the Arts at Princeton University presented visiting Haitian artist Didier Civil in a slide talk on Wednesday, April 20th at 7 pm at the Paul Robeson Center for the Arts. The event is free and open to the public. Mr. Civil was in Princeton during the week of April 18 – 22 as the Anne Reeves Artist-in-Residence at the Paul Robeson Center.

In January 2010, when Haiti was decimated by catastrophic earthquakes, thousands of lives were lost, and homes, businesses, schools and hospitals were reduced to rubble beyond recognition. But, in the Shawangunk Journal, September 23rd 2010, it was written, “Perhaps, the most positive news that can be said of such a tragedy is that one, most essential thing remained unscathed: the vibrance and spirit of Hatian culture. Nowhere is the continuing force of that spirit exemplified more poignantly than in the work of celebrated Hatian artist, Didier Civil.”

Civil has taught and practiced the art of papier-mâché in his home of Jacmel, Haiti for over 20 years. The development of papier-mâché was, in fact, born in Jacmel, and is used primarily to create the fantastical masks that are featured in Haiti’s Carnival, as well as in their All Saints Day and All Souls Day celebrations, the Haitian equivalent of Halloween. In Civil’s hands, however, the art has taken on an unparalleled depth and intensity, as the artist integrates classic Haitian themes, then expands upon them – striking out on uncharted ground, such as his series of three-dimensional portraiture. The strikingly colored, shockingly yet beautifully grotesque faces that emerge from Civil’s mind seem to capture the souls they represent, holding the viewers gaze, as if alive.

Civil’s work has become increasingly recognized in the US. With the help of Verna Gillis of Soundscape Presents in New York (www.soundscapepresents.com), Civil has been awarded the coveted “0-1 Visa for the Arts” by the US Immigration Service; the rare visa is awarded for “Extraordinary Ability.” As a result Civil has been in the US off and on during the past year to participate in upstate New York’s Rhinebeck Parade, for a one-week residency at Connecticut’s Wesleyan University, then on to Brown University in Providence, RI. He was in residency in Princeton before heading to another residency in New Orleans. His work was featured in New York’s Affirmation Arts Gallery (affirmationarts.com) in a showcase of Haitian art in the fall of 2010 and Civil’s singular portraiture was also be featured in a New York portrait exhibition in late 2011.

Didier Civil’s residency in Princeton was made possible through support from the Anne Reeves Fund of the Arts Council of Princeton and from the Lewis Center for the Arts at Princeton University. During his one-week residency in Princeton, Civil conducted daily workshops with students, through partnerships with Corner House, the Lewis Center and Community House at Princeton University. Civil is articulate about his passion for teaching, and for his home. “I want to open a school in Jacmel,” says Civil. “That is my dream. To teach the children, to give them something, that is what I’ve always loved to do.”