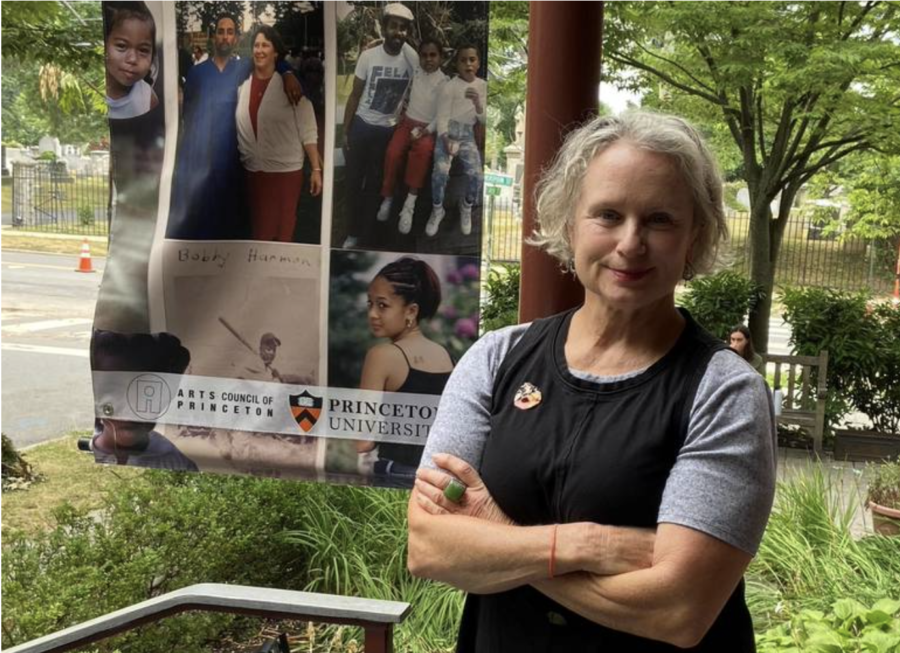 I see Maria Evans almost daily – even though I am neither a work colleague, nor a next-door neighbor, nor a close friend. I am, however, an avid admirer.

Reminding me of a 21st Century Mary Poppins, Maria — with a smile on her face and a far-away twinkle in her eye — cycles past my apartment daily from her Leigh Avenue home. Her bike usually is laden with the tools of her trade, including an assortment of paint brushes, paints, streamers, material, and paper flowers. She lands at the Arts Council of Princeton, ready and eager to make Princeton a better place with her magical touch. Just a spoonful of her special artistic sugar not only makes the medicine go down but also makes the bad stuff swirling through our lives far more bearable.

In every job that must be done
There is an element of fun
You find the fun and snap!
The job’s a game

Those words from “A Spoonful of Sugar” define Maria’s approach to her job as artistic director for the Arts Council, a position she has held since 2015. But the 60-year-old Maria notes that she has “held every job except for executive director and done anything and everything,” since she joined the organization 20 years ago, when Anne Reeves, the founding director of the Arts Council, hired her.

“I think I absorbed Anne’s serendipitous, playful, creative, can-do spirit. Every day I am here, I just have a good time, working very hard but loving every minute of it,” she says.

“I briefly did consider applying for the job of executive director, when the positions opened up after Anne’s retirement. But I quickly realized that the extensive administrative responsibility – including worrying about everything from broken toilets to non-stop advocacy, budget management, fundraising (the Arts Council is not municipally funded contrary to popular belief), and managing the operational budget – would greatly diminish the joy I find in the job. Adam (Welch) is a great executive director and troubleshooter and very engaged in governmental advocacy. But I get to do all the fun stuff.”

The ‘fun stuff’ of Maria’s job in the past few years took fun to a whole new level of intensity, when public art assumed a prominent position in the mission of the Arts Council. Referring to the website, Maria notes that the Arts Council, as part of its mission, has created public art installations—murals, sculptures, parklets, and more—in partnership with the town and private organizations in our community. Large in scale and highly visible to the public, these installations are part of an on-going project that is a community effort—with contributions from the Arts Council’s staff, local artists, corporate and government partners, and the public. Some of the installations are permanent, while others change in line with a theme or moment in time. 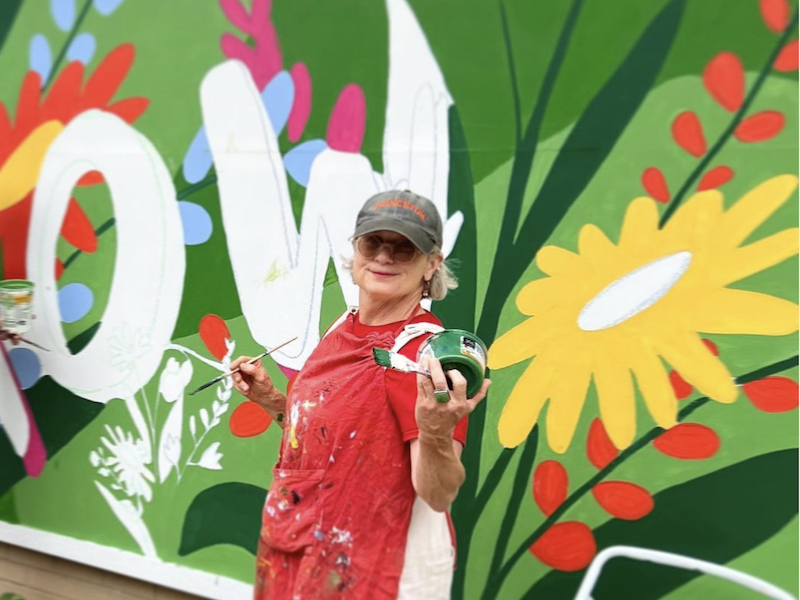 “I think that things really changed for us when then Mayor Liz Lempert about 10 years ago came to the Arts Council and asked if we could be the driving force behind establishing a parklet or street seats program for Princeton,” Maria says. Mayor Lempert thought Princeton needed more public art and that parklets could be a vessel for inspiring such a focus.

A community collaborative effort of the municipality, the Arts Council of Princeton, local architect Kirsten Thoft, landscape artist Peter Soderman, Jessica Durrie owner of Small World, George Akers of Material Design Build, and loads of other volunteers, created a legendary outdoor socialization and eating space that changed the entire vibe of the community. The Witherspoon Street parklet in 2015 was the first of its kind in Princeton, though a miniature version was briefly installed in the summer of 2014

“It was built at the Harrison Street firehouse and the creativity was magical. Tree stubs became benches, found wood became tables. Everyone was donating objects and their time and money and creativity. It was really like making Princeton’s Nail (aka Stone Soup),” says Maria, referring to the folk tale describing the joys of sharing. In the legend, a hungry traveler convinces inhospitable villagers (in Princeton’s case, the grumpiness resulted from giving up parking spaces and parking revenue) to create a delicious meal. Everyone throws something into the pot – a small amount of their food – with the end result being a fabulous concoction enjoyed by everyone.

That Small World parklet soup bubbled over to a parklets at JaZams and  Chez Alice on Palmer Square and eventually to a host of other public art installations in town – the murals, the pianos, exhibitions in partnership with Princeton Future at Dohm Alley, Christmas season public arts projects, including the kiosks selling original art and handcrafted items and the Christmas trees with thematic hand-made ornaments.

Instead of shutting down the Arts Council, the pandemic opened up new creative opportunities. Maria and the “wonderfully talented” Melissa Kuscin, marketing/program manager for the Arts Council, have become the generals leading the campaign against the isolating and dispiriting pandemic.

“We knew we had to take our creativity outside. With terrific support from the elected officials on the Princeton Council, we decorated the sidewalks with the six feet apart signs, we – yes Melissa and I – painted the Spring Street mural, changing it up regularly and reflecting community sentiment towards staying strong, voting, social justice, love. We now have gotten extremely talented artists to paint the Spring Street mural exhibitions.  Their efforts on Spring Street led to a contract with the Princeton Shopping Center to paint the murals on several of its open wall spaces,” Maria says.

Maria acknowledges that they failed to do adequate community outreach for the mural on Leigh and John Street on the wall of Lupita’s Grocery Store.  The mural “Journey” by Marlon Davila proved to be an educational journey for Maria and the Arts Council.

“It is very different when you are putting a mural in the middle of a neighborhood versus in a commercial district.  Since I live on Leigh Avenue and know the Martinez family and their commitment to the neighborhood, I was thrilled to be able to suggest a beautiful mural for the blank wall (no windows or doors) on the John Street side of their store,” Maria says. The family loved the artwork created by the extremely talented Hispanic artist Davila, whose painting illustrates beautiful monarch butterflies, which in Hispanic culture symbolize the souls of heroic ancestors. It also celebrates the neighborhood’s African American culture with a depiction of the stars of the big dipper, whose North Star was a beacon to freedom by helping slaves to find their way north.

“But when we presented it to the town, controversy ensued because we had not done adequate conversations with the residents of the neighborhood. Realizing our mistake, we called John Bailey and asked for his advice and scheduled several public meetings. The upside of all this: Not only was it a terrific learning experience for me about neighborhood relations, but it also really connected me with Romus Broadway and his amazing photographs,” Maria says. [Click here for Pam Hersh’s column on Romus Broadway.]

When Maria first settled in the neighborhood decades ago, she was completely unfamiliar with Princeton and New Jersey.  She and her husband moved here from North Carolina because he accepted a job at Princeton University as book conservator, preserving print treasures from such authors as Toni Morrison and F. Scott Fitzgerald.

Born in Ohio, raised in Michigan (her family still is in Michigan), educated in California and Alabama (BA Humboldt State University, MFA University of Alabama), employed in North Carolina, Maria says she “had no idea” what she, a sculpture-based artist, would be doing in Princeton.

“My whole life I always knew I wanted to be an artist or a gourmet cook or both. My mom was not formally trained as an artist, but she always made everything from scratch and was extremely creative,” says Maria. “I was very optimistic that I would find something – and that something happened when Anne Reeves hired me.” Maria has become the artist/gourmet cook who has managed to create a glorious stone soup of public art for Princeton – a brew that keeps on giving.